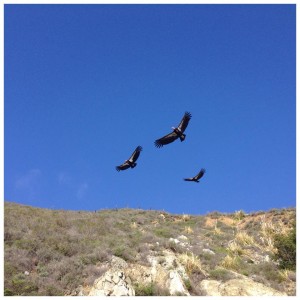 And lo & behold they decided to chase after us!

Such an incredible metaphor that we do not need to turn around so that we don’t leave anything behind…if anyone or anything wants to soar to the highest heights, they will rush to find us & rise up to meet us ;-))

As they flew right by our chariot we pulled over & they circled back around soaring right above our heads… not once but 3 times…encircling us over & over again.

We knew that we were being blessed with a supreme blessing & when we read the symbology of the Condor our Spirits truly soared:

Condors prefer to live in the high mountains, to fly in the skies above the cordilleras. They symbolise the highest elevation, above limitations and obstacles. They are, above all, the symbol of the transpersonal; they integrate the wisdom of those who have died, those who have no ego. They are the symbol of spiritual ascension, of communication with the spirits, with what is subtle.

The condor is the symbol of creative power, the incarnation of timeless philosophy; his majestic flight suggests the process of life itself, of creative eternity, whose ever-living works are made up of births and deaths.

The eagle is the symbol of the sun, but the eye of the condor is the sun; it symbolises the hidden light of the great emptiness. It is the master of weather, of thunder and lightning, of wisdom, of new vision, of prophecy, of illumination.

The condor is without doubt the king of the skies, but ultimately he is a servant, a simple gardener, the instrument of the art of renovation, of cleanliness and purification; new productions need new spaces, which are fertilised from the disintegration of the old, of the spirits of the dead. Wisdom, prudence, calm, reflection, discretion, intuition, vision, prophecy, messenger of the divine – these are the attributes of the bird.