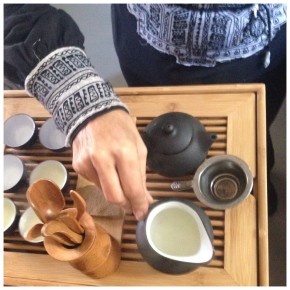 Today I had the great pleasure of experiencing the most beautiful and delicately refined traditional tea ceremony hostessed by my dear friend Sara, a Master of connecting with the Medicine of Plant Spirits.

Drinking Tea, she says is one of the most powerful ways of connecting with the wisdom of the land, people and spiritual energy of the place where the tea that we are drinking grows and has the effect of awakening higher states of consciousness.

We first smelled and then sipped about 5 little cups of Oolong Tea that she acquired from a Chinese friend who travels all over the world questing for the finest organic teas.

Then we smelled and sipped about 5 little cups of a Pu-erh tea from China that had been aged for over 40 years.

Each sip we sipped awakened the part of me that is awake, aware, alive and deeply appreciative of each moment and I found my vibration continuously rising and settling into an embodied realm of sweet happiness, peace and calm contentedness.

Before she poured the last little cup of tea she said,

This cup is for a part of you, a loved one or anyone or anything that you would like to connect with more deeply.

During the last week of leading the Vibration Transformation Cleanse I found myself intensely aware of the part of me that I like to call The General Manager of the Universe.

I first heard that cute, funny and true term for the part of me that thinks I have all the answers, knows what’s right for me and everyone else and wants to control everything internally and externally while doing an Emotional Freedom Technique tapping session with my friend Kate.

During the Cleanse I discovered how deeply exhausting it is to be the General Manager of The Universe.

So I gave my 2 weeks notice and am currently going through the process of passing the responsibility of micro-managing the Universe back to, well, The Universe.

During the Cleanse the gift of a book arrived in the mail from one of my clients.

The book is called The Surrender Experiment by Michael A. Singer and I have been listening to the book on tape and highlighting my favorite parts in the book every moment I can.

In the book he asks,

Am I better off making up an alternate reality in my mind and then fighting with reality to make it be my way?

Or am I better off letting go of what I want and serving the same forces of reality that has managed to shape the entire perfection of the Universe around me?

The answer to me is clear.

So when Sara went to pour the last cup of tea, I knew she was pouring it for the General Manager of the Universe.

I picked up the cup and before it even touched my lips, the General Manager of the Universe said:

What are you afraid of?

The General Manager of the Universe said:

The General Manager of the Universe thought about it for a second and simply said:

And ever since then, the General Manager of the Universe inside of my head has had absolutely nothing to say about anything. 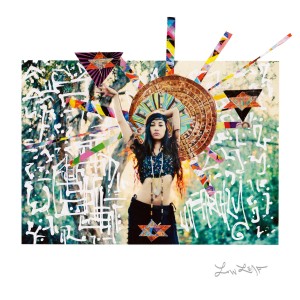 LOVE and GRATITUDE are the highest vibrational frequencies in existence and have miraculous powers to uplift, inspire and heal.

Flowing high vibrational LOVE and GRATITUDE towards anyone (including yourself) who has not been doing the deep work of clearing their inner blocks to Love including past hurts, regrets and sadness can oftentimes be a very uncomfortable experience.

There are going to be some major cleansing reactions that might not feel good at all and you just might want to quit and run back to your old ways of being.

As you raise your vibration with the high frequencies of LOVE and GRATITUDE, be patient with the process.

Trust that little by little the lower frequencies are being cleared, creating space for you to receive and embody greater LOVE and GRATITUDE than you ever imagined.

May your transformational journey into LOVE and GRATITUDE be blessed with ease, grace and harmony .